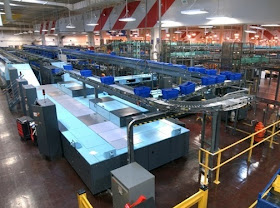 If ignorance is bliss, as the old saying claims, then the U.S. Postal Service must be in a truly blissful state about its billion-dollar Flats Sequencing System.

• Sorting catalogs, magazines and other flat mail on FSS machines costs 6 cents per piece, versus 2 cents for the older Automated Flats Sorting Machines. In theory, the USPS could be making that up in improved efficiency at the delivery units, but “the Postal Service does not have any current information about carrier work-hour savings related to FSS processing.”

• The Postal Service doesn’t seem to be doing anything to track, understand, or correct one of the FSS’s biggest problems – flat mail that is supposed to be sorted on the football-field-sized machines but is instead processed on the AFSMs or manually. An in-depth study of five Atlantic Coast FSS facilities found an average “leakage” rate of 23%. (Dead Tree Edition’s opinion is that such a high leakage rate makes it virtually impossible for the FSS to achieve net savings. More on that below.)

• When FSS facilities receive mail that can’t be run on the machines, they simply divert it to other means of sorting without reporting the problem. That means there is no feedback to those who could prevent such problems from recurring – such as mailers, printers, and the postal employees who write or enforce flat-mail specifications.

“Given the significant investment in these machines and their poor performance . . ., management needs to fully understand all the costs associated with the machines to best inform its decision going forward,” the Inspector General’s report says.

Productivity of the machines themselves is not an issue, the report indicates. The 18 Capital Metro Area (Maryland to Georgia) FSS machines average throughputs per labor hour during the 15-month study period exceed the goal of 1,650 by 1%.

But because of leakage and declining volumes, the machines are underutilized. The machines were run an average of 12.5 hours per day rather than the goal of 17 hours.

Who's minding the leakage?
At all five FSS sites the OIG staff visited, “flats mail was removed from FSS preparation areas because it could not be processed on the FSS due to its thickness, size, or unreadable address or barcode.” Such out-of-spec issues are supposed to be documented so that postal officials can work with mailers to prevent the problems from recurring.

“None of the five facilities we visited used the electronic Mail Improvement Reporting (eMIR) system, as required, to report the flats mail problems we observed,” the report says.

“Management at four of the five facilities we visited said that prior eMIR system reports did not resolve mail problems.”

“During the audit, we repeatedly asked management to provide quantitative data categorizing the leakage causes. Although management informed us they had that information, nothing was provided. In addition, management expects mail processing facilities to optimize their processing windows to minimize leakage; however, without knowing the specific cause(s) of leakage, processing facility management may not be able to mitigate leakage.”

In response, USPS management indicated that late deliveries to the FSS facilities were a major cause of leakage. Each FSS facility processes flat mail in a predetermined order, it explained, so when a shipment arrives for ZIP codes that have already been sorted, the mail is diverted to other sorting processes.

(But do the people scheduling the deliveries know which ones are consistently problematic, so that they can adjust the schedules? And here’s a radical thought: Instead of considering a delivery one hour late for today’s processing, why not consider it 23 hours early – for tomorrow’s processing? That way, it can be run on the FSS, as intended.)

Strategy: We goof, you pay
Mail that is prepared in the proper sequence for FSS machines cannot then easily be sorted on AFSMs or manually. That makes FSS leakage copies a sort of worst-case scenario: The USPS’s costs for delivering them are inherently more expensive than for mail that has been prepared for and actually sorted by AFSMs or manually.

What’s even worse is that, if not for FSS, at least half of those copies probably would have been prepared in carrier-route bundles, a nearly best-case scenario for the Postal Service.

No matter how well the 77% of non-leakage mail is handled by the FSS machines, it can’t make up for the huge incremental costs of sorting the 23% of FSS mail that is diverted to other sorting methods. The Postal Service’s strategy for the FSS has been to ignore the problems while trying to pass along the costs to customers in the form of emergency rate hikes.

We will review your comment as soon as possible and then publish it if is relevant.